If you have ever attended a NASCAR race at Talladega Superspeedway then you’ve probably seen this iconic gold semi with gray stripes hauling a giant American flag speeding towards the start/finish line as the National Anthem is being played over the loud speakers. There is no greater display of American pride than in those few moments leading up to the start of the race.

This iconic pre-race salute was started in 2001 by racing legend John Ray Sr. just shortly after the 9-11 terriorist attacks and the tradgic passing of  Dale Earnhardt Sr. Ray, along with Talladega Superspeedway Chairman Grant Lynch, searched for something to boost the morale of the nation and a devistated fan base that had endured a year of tragedies. The answer was found in the 18-wheeler of John Ray Sr and the mutual love and respect for the USA. From that point on, a Talladega tradition was born.

In recent years, Roger Haynes has been taking care of driving duties. However, in May, Haynes passed away after a battle with cancer.

This weekend Rick Ware Racing will honor John Ray Sr. and his incredible display of ultimate patriotism with a special paint scheme that mirrrors the markings of his iconic gold Peterbilt rig.  Austin Theriault will drive the #51 Jacob Companies Ford Mustang in the 1,000Bulbs.com 500 on Sunday, October 13th.

SMD has the pleasure of creating this unique paint scheme honoring John Ray Sr and the rich tradition at Talladega Superspeedway. 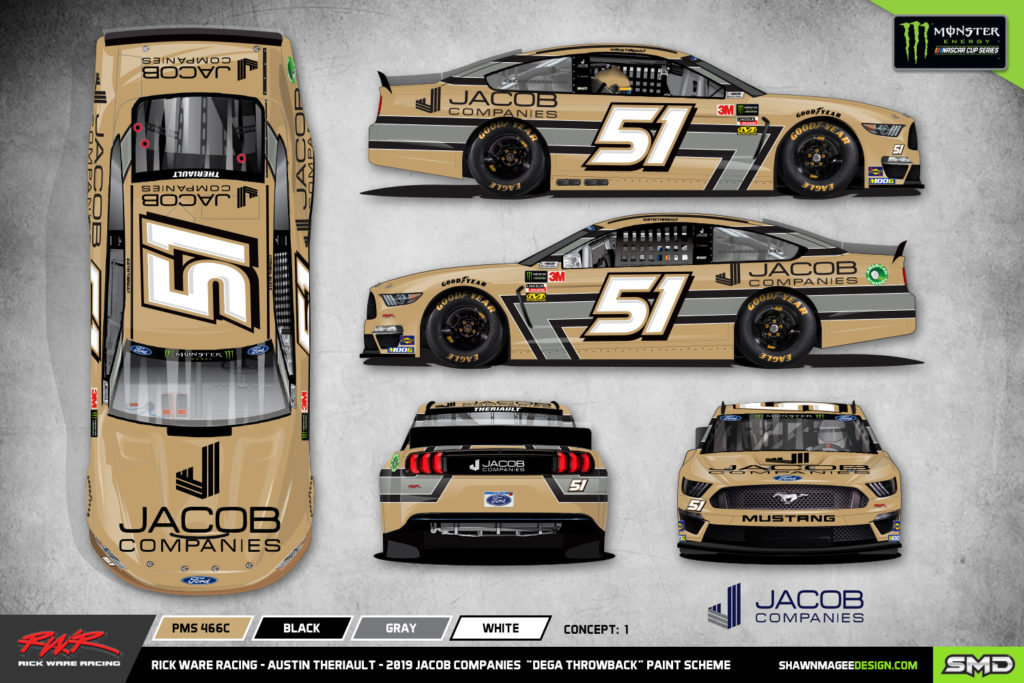 Ray, who has owned the “John Ray Trucking Company,” since the early 70’s, actually set the World Speed Record for a semi-truck and trailer around the mammoth 2.66-mile track at 92.083 miles per hour in 1975 – in a powerful Kenworth Diesel that hissed and hummed through the tri-oval at a break-neck speed one fall afternoon. Ray has not always been just a trucker, however – he was a racer. He competed in the Cup Series from 1974-1976, starting eight races, four at Talladega, where he earned a career-best 22nd place finish in 1974 before an accident at Daytona in ’76 ended his driving career.

“I was just starting to get my career going when I had a bad wreck at Daytona,” he said. “I was in the hospital for a while and had a long road to recovery. Safe to say that my driving career was over, but that couldn’t stop my love for racing.”

Ray continued on as a car owner in the Cup Series on a limited basis. In fact, he gave one of the sport’s legends one of his first opportunities – Earnhardt Sr., the 10-time Talladega winner.

“I got a call from an old friend that I raced on dirt with, Dale Earnhardt,” Ray said. “He needed a ride for the upcoming Atlanta race. Needless to say, he rolled the car in turn three and completely totaled it. I was still in a neck brace (from my wreck) when I got to the care center and I asked him, ‘Are you alright?’ He looked at me and said, ‘Yeah, sorry about your car.’ I was just glad he was ok.”

Ray’s story at the Superspeedway continued in the form of volunteering. For nearly 40 years, he has been a member of the White Flag Club, a dedicated service group of local businessmen from surrounding communities that assist the track during race weekends.

For Ray, life has given him some amazing opportunities, and because of that he loves to give back, whether it’s driving the iconic big-rig around the track or helping wherever needed. He will always, like his pace-lap, be unique to Talladega Superspeedway.

Rick Ware Racing is an American motorsports team which currently competes in the Monster Energy NASCAR Cup Series and the NASCAR Xfinity Series. The team has competed in NASCAR, the ARCA Racing Series, the WMA Motocross Series, AMA Arenacross, Motocross and Supercross Series, Summer X Games and Rolex Sports Car Series since 2008, and is owned by former driver Rick Ware. Since RWR’s inception, the organization has won championships in the SCCA, the WMA Motocross Series the AMA Arenacross Series, in partnership with Tuf Racing, the Whelen Modified Tour at Bowman Gray Stadium in partnership with Tim Brown Motorsports, as well as “Top Performing Independent Team” in the Motocross and Supercross Series’.