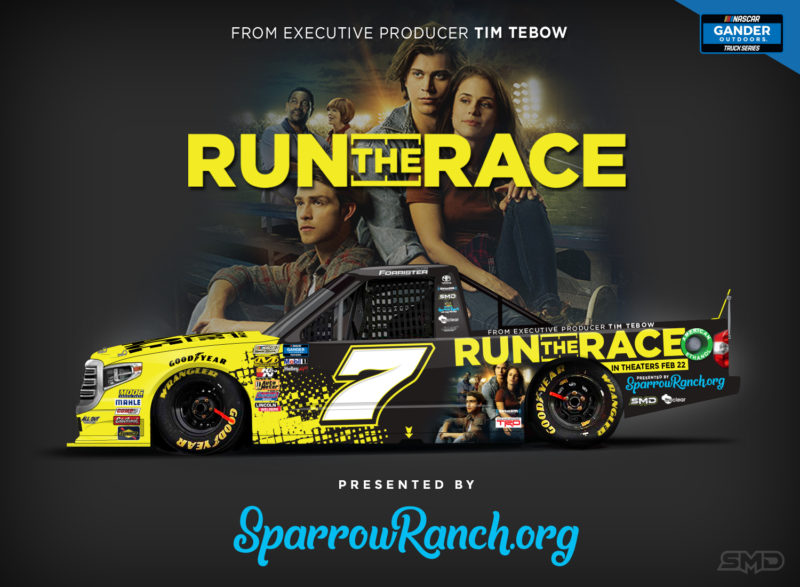 It was announced today that Korbin Forrister will be debuting a new paint scheme for the NASCAR Gander Outdoors Truck Series season opener NextEra Energy 250 at Daytona International Speedway next month. Ricky Teal, Founder of Sparrow Ranch on the Island, a special needs focused ministry, made the official announcement via Facebook that his organization would be partnering with film distribution company Roadside Attractions to promote Run the Race. This faith-based feature was co-executive produced by former NFL star and Heisman Trophy winner Tim Tebow and his brother Robby.

Roadside Attractions, partly owned by Lionsgate, plans to release the film in theaters on February 22, 2019.

Sparrow Ranch on the Island is a Christ-centered ministry designed for those with special needs and their families. We have large themed events lasting all day with fun, food and games. As the sun begins to set, everyone gathers on the sand by the water. The tiki torches light up and guests dance to the sound of the waves rolling off the rocks. It’s here where treasures are discovered as our friends with special needs engage the crowd in an amazing time of worship through the art of music, storytelling, sign language and well just things words cannot describe. Sparrow Ranch on the Island is a place cultivated in love. It is planted in unique seeds deemed broken by many. Here, they are nurtured to bloom revealing the depths of Gods Glory. From the moment you arrive at the tropical oasis on the sandy shores of Lake Wylie you will feel the love and be greeted with a southern gentle breeze and the sound of laughter.

Korbin Forrister, driver of the No. 7 Toyota Tundra competes in the NASCAR Gander Outdoors Truck Series for the team All Out Motorsports, owned by his parents, Ken and Karen Forrister.